From medical water to a spa town – chronicle of five decades

The road was long from finding medical water to gaining the certificate of a spa town. Both the leadership of the town and private investors were motivated by the common goal of developing tourism. Medical water has been present in the life of Sárvár since 1961, when valuable water found while drilling for oil. In Sárvár there are two kinds of water: in the pools there is a water with a temperature of 43° C coming from 1.200 metres of depth, the other with a temperature of 83° C, coming from a depth of 2.000 metres, containing sodium-chloride, hydrogen-carbonate, iodine, brome, fluor and other micronutrients.
The medical water based tourism became stronger from the beginning of the 1980ies. The already established spa and camping had 160 thousand visitors. At that time there was a sports field on the spot of the spa now. The foundations for the Danubisu Thermal Hotel were laid 1983 and it opened its gates 1985 in form of an Austrian-Hungarian cooperation.
The Sárvár Medical and Wellness Spa opened its gates 2002, thus enhancing the town’s position on the health tourism market and bolstering its tourism. The spa became 2004, as the only Hungarian spa, a member of the Royal Spas of Europe. In April 2007 the spa won the prestigious EuropeSpa-Med quality award, 2008 the Certifying Committee of the Hungarian Spa’s Association ranked it into the highest, four-star category. 2010 phase two of the spa development was implemented, thus with the help of an investment amounting to 3 billion HUF, the spa became a family spa with 720 thousand visitors 2011. 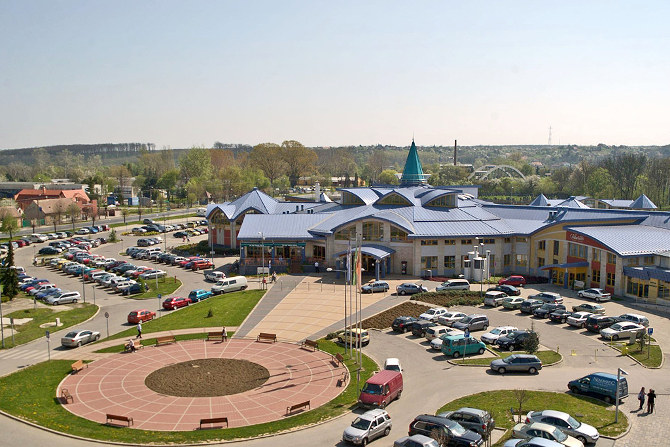 The remarkable developments brought along several new hotels (VitalMed Hotel, Park Inn Hotel, Spirit Hotel), but also new pensions and apartments. Accommodation facilities were expanded as 2001 there were only a mere 26.000 guests, the 444.000 visitors 2011. made the town the 7th on the list of most popular municipalities in Hungary.
By 2011 the town was able to win the award of a spa town. Its natural features meet the criteria for winning such a title: its medical water is certified and excellent; its surroundings are structured, its air is excellent; noise level is below permitted border values. However, also the socio-economic conditions are given: the spa is known in Hungary and abroad; the town is prestigious and a target of domestic and foreign tourism; there is neither polluting industry, nor other polluting economic activities; there is a sufficient number of accommodation facilities of the right quality.