The Renaissance castle located on the southern side of Kossuth Square is one of Hungary’s most outstanding monuments, the town’s symbol. 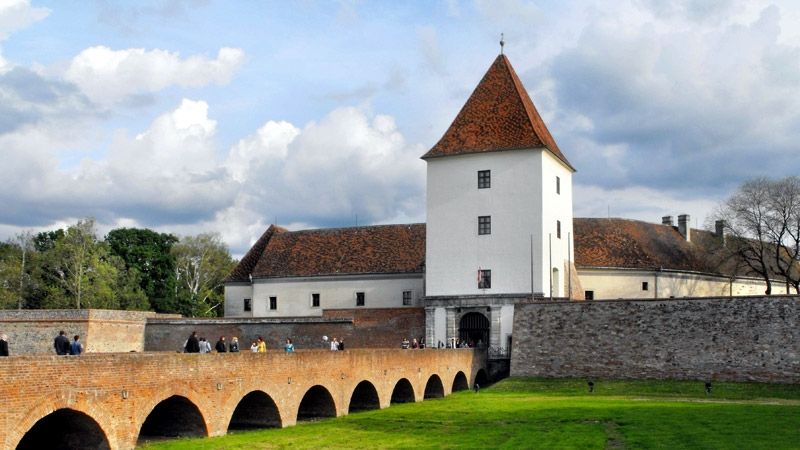 The present day castle has developed from the three-storey, 13th century dwelling tower in its southwest corner and the single-storey northern wing. The castle’s first mention is from 1288. The next great building operations took place in the second half of the 15th century, in Gothic style. During the times of the Kanizsai family a three-storey dwelling structure adorned with representative objects and suitable for nobility was raised where the southern wing stands today. The lower level of the present-day gate-tower was created at the end of the 15th century. By the beginning of the 16th century the large, closed courtyard came into existence, while the castle’s protection, apart from its natural assets, was assured by earth ramparts with notched planks. Between 1534 and 1671 the Nádasdy family owned the castle. As a result of the Renaissance style constructions the castle’s current form took shape.

The ceiling frescoes of the Great Hall were done in 1653. The defensive system of Old Italian style bastions that can be seen today was built between 1588 and 1615. The ceiling frescoes of the Great Hall were created by Hans Rudolf Miller, while the wall pictures depicting images from the Old Testament were painted by István Dorffmeister in 1769. In 1803, the Archduke Ferdinand Estei bought the castle, which was renovated by his successor. The Renaissance arcade along the eastern wing was walled up. On the wing’s upper level corridors were built, so that the castle could be walked around. The water was drained from the castle moat, and the present-day bridge was built. During the 19th and 20th centuries only minor alterations took place, so even today the castle presents an image of the fortified late Renaissance castles of the 16th-17th centuries.